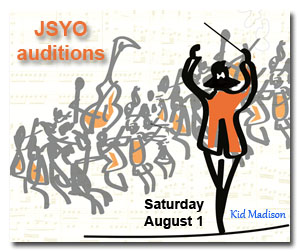 The Jackson Symphony Youth Orchestra (JSYO) continues to provide children and teens an opportunity to hone their musical talent as well as experience performing in a professional setting. As it begins its 17th season under James Weil, the JSYO is seeking serious musicians to participate in its new season where members will present three concerts along-side The Jackson Symphony during its 2015-2016 season.

Auditions will be held on Saturday, August 1 starting at noon in the Union University Rehearsal Hall for students who play any string instrument, standard orchestral brass and woodwinds, or percussion and are interested in participating (audition requirements) in the JSYO. Students must audition to be considered and will receive an audition time once their audition form and fee have been submitted. Students, grades sixth through twelfth, will be considered.

Rehearsals for the new season will be held on Thursday evenings from 6 p.m. to 8:30 p.m. at Union University in Jackson.