For the past 15 years, acoustic guitar player Trace Bundy has performed in more than 26 countries, including the United States, and sold more than 99,000 CDs on his independent record label, Honest Ninja. In 2008, he was named “Most Promising New Talent” by Acoustic Guitar Magazine. Despite his celebrity, Bundy’s path to pursuing his passion of playing music full-time had a humble beginning. 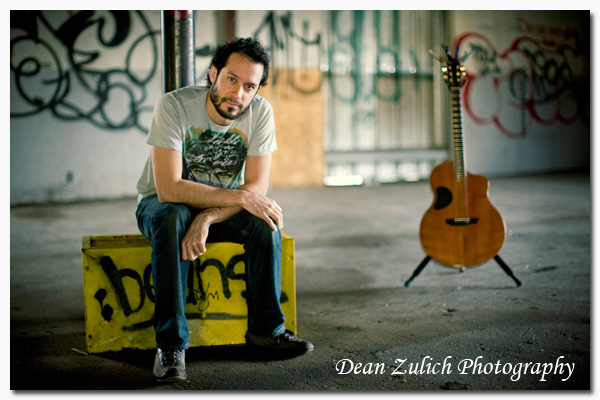 “It kind of happened by accident. This guy was selling his guitar for ten dollars at a yard sale,” said Bundy. “My brother and I literally had five dollars each in our pockets, and we chipped in together and bought the guitar.”

Bundy and his brother, Greg, shared the guitar, and it soon became evident to him where his passion lied.

“Once I got a lot better playing and starting to have a lot of fun with it, I eventually bought my own guitar,” said Bundy, who grew up listening to the Beatles and acoustic oldies like Simon and Garfunkel, Cat Stevens and Bob Dylan. “I tried an electric guitar, but went back to the acoustic guitar, because I love the fact you can create so many different sounds and tones.”

Bundy honed his skill playing by ear and from learning the songs in the guitar magazines he read. Although he had no formal instruction, he always had a desire to learn the rules of music.

“I have learned a bit of music theory and the reasons why some notes sound good together and other notes don’t,” said Bundy. “I am always trying to take that structure of music and break those rules in a way that it will still sound good.”

He continued playing while in college at the University of Colorado where he studied Civil and Environmental Engineering. After graduating, Bundy took a couple of years off and taught rock and ice climbing.

“In the summer I would teach rock climbing and I would teach ice climbing in the winter,” said Bundy. “I had done well in college and one of my professors tracked me down and asked me to return to school to earn my masters degree. They offered me this amazing full-ride scholarship that involved me going to South Africa to do research. It would have been really stupid of me to say ‘no’, so I went back to grad school and got a Masters in Civil Engineering”

With his masters, Bundy worked for the University of Colorado as a part-time professor teaching engineering courses to freshmen.

“It was really during that time my music started taking off and I was getting offers to play all over the place. I would either take them or say ‘no’, because I had to be back at school on Monday to teach these classes. It was hard to juggle all of that and I eventually realized I should quit teaching and do music full-time.” 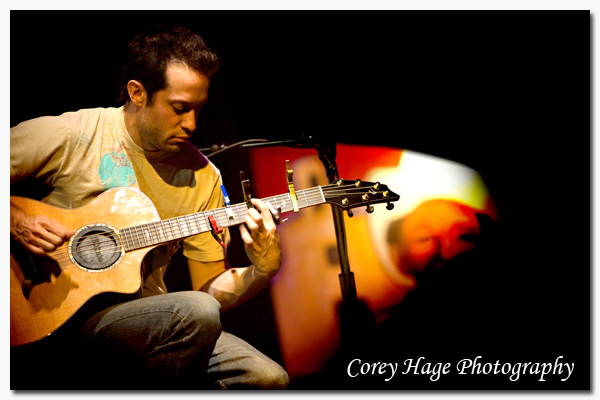 Bundy made the decision to concentrate on his music career. One would call it taking a leap of faith, but he sees it as more calculated.

“My engineering mind did the math of all the shows I could do and the offers I was getting. That first year performing, I was already doing better financially than I had teaching engineering. It has gotten better and better since then and it’s pretty cool,” said Bundy, who experiences a lot of joy while performing. “It is a way for me to express myself without using words since I don’t sing. It’s all instrumental and I think I have a kind of bad voice, so I get to use the guitar as my voice. I do talk a lot and tell stories during my performances, but as far as music itself, it is my way of expressing the art within me.”

Bundy grew his fan-base using social media before it was a highly recognized means of self-promotion.

“I had a website and started with Myspace when people use to have to download files onto their computer to see my videos,” said Bundy, who eventually gained a wide following in Taiwan, Europe and the United States. “When YouTube came out, that was great and Pandora has been really good for me.”

He is also very visible on Facebook and Twitter where he has gained additional fans. Bundy never expected the following he has garnered over the last 15 years.

“I think back in the day, if I were able to pull 50 to 100 people to come and pay to see me play somewhere, then that would be pretty cool. But I don’t think I ever expected it to grow much beyond that, and definitely not internationally. I remember when I went to China the first time, about three years ago, 250 people showed up and I was wondering how they knew about my music,” said Bundy.

He does not take his celebrity for granted realizing the difficulty in achieving success in the arts.

“I just feel very fortunate I am able to make it. I talk to a lot of young musicians and I always tell them not to assume it is going to work out. They should work on their craft until it gets to the point where they know it is going to work. I was never too pushy with it by trying to force my way into venues and doing different things. I pursued my craft as well as I could and walked through doors as they opened,” said Bundy.

Bundy owns six really good guitars that include two McPhersons and two Breedloves, which are high-end guitars and brands he loves. He no longer uses a pick, but instead uses the long nails he has grown on all of the fingers on his right hand.

“It’s kind of like having five picks on one hand,” said Bundy.

Bundy’s performance at The Ned will be his first visit to Jackson and the audience can expect not only an entertaining performance, but an introduction to music as he explains the various techniques he uses. He will also include songs from his latest album, “Elephant King”, which is on CD and DVD.

“I will show the audience how you can make a guitar sound like a drum kit; show how you can play it with both hands up on the neck almost like you’re playing a piano and make it sound like a bell ringing. You can do any kind of different style of playing on a guitar. I am also going to try and play a song I wrote, “Joy and Sorrow”, that uses two guitars during the whole song. I’m kind of back and forth between two guitars and it is super fun to play,” said Bundy, who hopes the audience walks away from the show with smiles on their faces.

Bundy plays for a variety of venue sizes, with audiences from 30 to 800 or more people. The age range of people is just as vast with newborns to seniors.

“I recently played a show in Portland, Oregon and there was a newborn baby in the audience; a whole family in the front row with children ages six on up to 13, and as I was leaving, there was a group of older people and a lady in her 90s, who said she loved the show,” said Bundy.

Many young people leave Bundy’s shows inspired by his performance. For those who have a passion about playing music, especially the guitar, he encourages them to pursue their interests.

“To the parents, I encourage you to definitely foster that interest,” said Bundy, who is the father of two young sons. “Some kids will start by learning all of the music theory and learning how to read the notes and all of the scales and techniques. That’s good eventually, but I would say it is not the best place to start. The best place to start is to find enjoyable songs they want to listen to and they want to learn how to play. They will learn a new technique with every song they learn.”

“To the children, always be working on something that interests you. If your desire is to pursue your music professionally, pursue it with passion and excellence, but don’t try to force it. If it is meant to be and the timing is right, those doors will start opening by themselves.

Don’t miss a thing! Subscribe to the Kid Madison newsletter and get our articles in your inbox!

©2015 Kid Madison. All rights reserved. All text, photographs, artwork and other content may not be reproduced or transmitted in any form without the written consent of the author. http://kidmadison.com.